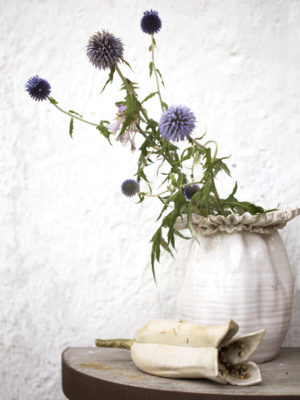 “It was Bernard Leach who uplifted pottery to an art form. Bernard Leach didn’t make pots, he made art,” comments Maria Ekberg, a potter with a gallery in Hammenhög in Österlen. She has always admired Bernard Leach, an Englishman born in 1887 who lived his early life studying pottery in Japan before returning to Cornwall in England in 1920 to set up his own pottery. He developed his own style based on a combination of traditional Japanese, Chinese, Korean and European slipware. (Slips or engobes are colourful coatings of liquid clay applied to the surface for decoration.)

Bernard Leach (1887-1979) was one of the great figures of 20th century art and his sons David and Michael carried on the tradition. Maria Ekberg once attended a workshop held by his grandson John Leach who trained under David Leach. Inspired by the Leach legacy, she has developed her own special style of ceramics featuring flowers, buds and seed pods. No ceramics like hers can be seen elsewhere in Sweden.

“I have never had the ambition to be an artist,” says Maria Ekberg modestly. “Few potters would actually call themselves artists. Perhaps we are so busy mastering our craft and learning pottery that this alone takes us a whole lifetime if not longer! This has been the case for me. So I have been quite satisfied to call myself simply a potter up to now.”

Her garden is like a gallery decorated with her creations placed on iron bars planted in the flower beds. In the spring and summer, her bold ceramic floral creations on their metal stems can be seen juxtaposed with roses, hydrangeas and crocuses. They bring colour to her garden all year round even when the flowers are long gone and the cold winter winds blow. 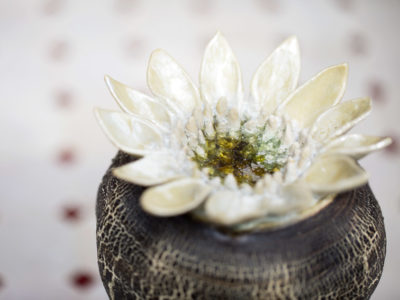 Her latest collection is inspired by flowers without petals. She is fascinated by what is left when the petals have fallen to the ground. The petals represents the transient radiant beauty of a flower but the bulging seed pod left behind can also be seen as an object of beauty, depending on the eye of the beholder. The stamens and pistils of the flowers protrude prominently in her latest art with naked flowers that almost resemble sea anemones. “I have grown a bit tired of creating shiny, colourful flowers and pods,” she admits. This year she has created a more austere look with subdued pale colours and off-whites.

Maria Ekberg encapsulates seed pods in her art. Interestingly, Hammenhög where she lives and has her gallery was once the home of a thriving seed company named after this small town on the plains of Österlen.

Thomas Alexanderson is another potter from Österlen. He lives at Ateljé Brännorna secluded in the woods near Onslunda where he has practised his craft since 1975.

Bernard Leach mastered the technique of firing clay in traditional wood-burning kilns. However, since the 1950s, electric kilns have largely taken over for the firing of clay. Inspired by the work of Leach, Thomas has built two wood-burning kilns on his property in the woods, one for salt glazing and the other for glazing without salts. “I work very much in the spirit of the ancient pottery tradition. I like to use salt glazing which has its origins in Asia,” says Thomas. “The ash from the fire gives certain effects and this can vary depending on how the wind is blowing outside. You can also achieve special effects using techniques such as reduction.” (Reduction is the creation of a special type of atmosphere.)

He holds up a teapot where one side of the pot has a mottled look because the glaze was exposed to the ash whereas the other side, not facing the fire, has a more uniform colour. Thomas Alexanderson likes these unpredictable effects. “You never know exactly how a piece will turn out,” he says. “I also like it when you can see traces of the hand of the potter in the final piece. Each piece has a memory etched into it from the time when it was made.”

His pieces are marked by the insignia T in a square plus his brand name Thomas Drejare, which means Thomas the Potter. He likes working in large formats and many of his circular bowls are about one metre in diameter. “Is this art?” I ask referring to the bowl. “You can put fruit in it if you like but many people hang these bowls on the wall,” he replies. “I like making teapots too because they are functional but yet works of art.”

His teapots come in a multitude of salt glazes and often have a multi-faceted surface created by cutting the clay with a knife. The salt glazes are various metal oxides known by exotic names such as tenmoko, chün, shino, celadon and ox blood. The latter describes a blood red glaze which Thomas has used for one of his teapots – the perfect pot for a rooibos drinker! The most expensive teapots sell in his studio for about SEK 1400 each and often come with matching mugs and cups.

Thomas Alexanderson has become a well-established potter in southern Sweden after 40 years working in Onslunda and he has built up a large customer base. His studio is open from 11 am to 5 pm for visitors throughout July and the first half of August or by appointment.

He produces a large output of pottery but the method he uses is painstakingly slow. Each firing of the oven takes 12-14 hours and he and his sons usually chop the wood themselves. This is truly a handicraft and each piece he makes is unique in its own way: “You can come and see the process,” he says, inviting visitors to see him at work at his potter’s wheel. “Experience the living surfaces of the pottery where the flame has licked and the ash has fallen.” 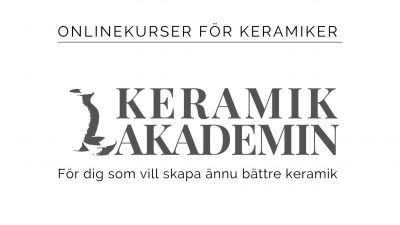